Companies in other, “safer” sectors are also staffing up.

As Americans suddenly find themselves depending more than ever on technology platforms for work and entertainment, listings for temporary tech jobs rose through the end of February into March, according to data from employment marketplace ZipRecruiter.

“Tech companies are seeing a surge in demand for their services and their technologies,” says ZipRecruiter labor economist Julia Pollak. “They’re seeing kinds of demand that they really didn’t plan for.” Non-tech companies are also beefing up their IT departments as they scramble to move operations online to keep employees home.

Still, these hirings are hardly likely to offset the sobering losses in other areas. And for those without technology expertise, jobs requiring engagement with large numbers of people, some of whom could potentially be infected, may be the only way to survive, even as officials urge people to stay home as much as possible.

Still, these hirings are hardly likely to offset the sobering losses in other areas.
即使如此，他们的招聘 几乎不能抵消 其他领域的严重损失
requiring engagement with large numbers of people需要大量人参与 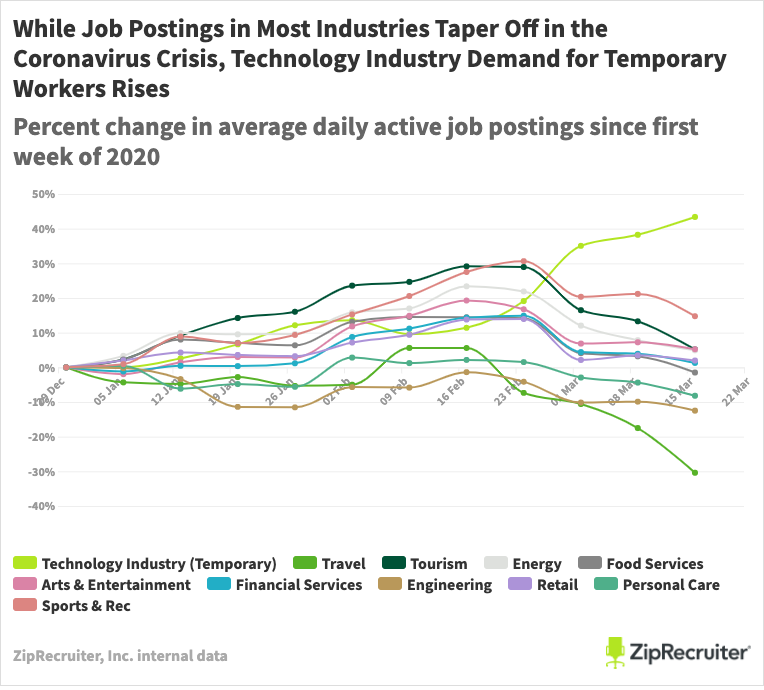 Even when some degree of normality begins to return, the economic effects of all this will reverberate for years. “Personally I’m expecting a big spike in unemployment, because I think there’s going to be a big drop in spending,” says Richard Rogerson, an economist at Princeton University.

He points out that, even if people find a way to survive the financial fallout from the pandemic, their employers may not. “What you would like is, everyone just goes back to their job,” says Rogerson, about the post-health crisis period. “But what if some of those businesses don’t exist anymore?”

For now, there are a variety of efforts afoot to help laid-off workers make ends meet in the short term.

In the meantime, workers are banding together.

The National Domestic Workers Alliance and UNITE HERE, a union representing hotel, gaming, food service and other employees, are launching relief funds to help the hardest hit, for instance.

Other ad-hoc efforts, like donation-based freelancer and creative emergency funds, could also help.

Efforts like these suggest that those who are able are finding ways to help people in need.

“There’s a lot of vulnerable people out there,” says Diaz, the bartender. “It’s going to be up to us normal folks to step in and do what’s right.”